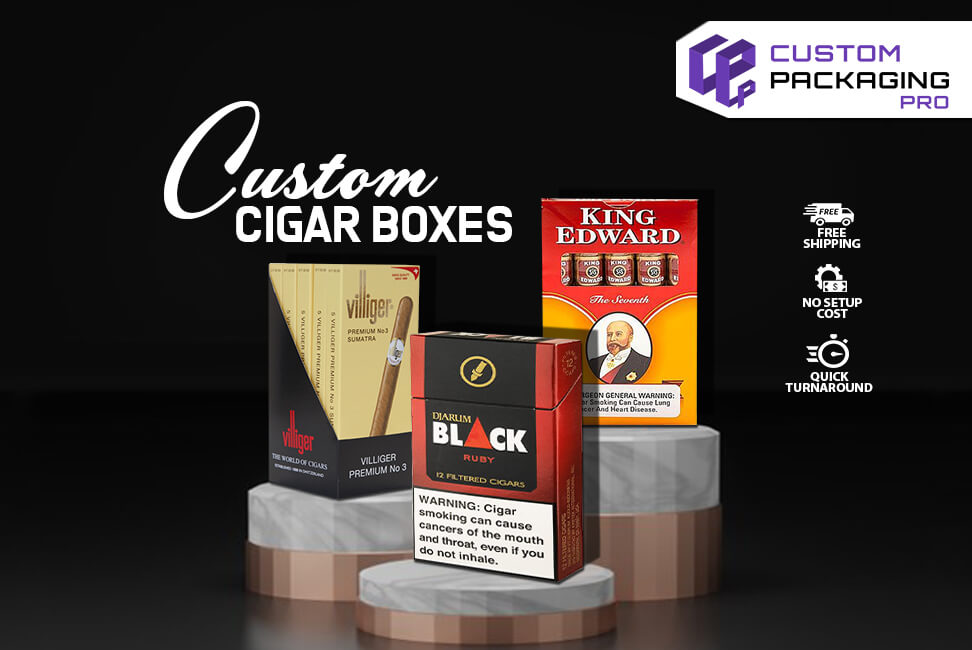 There are several types of cigar packs ranging from the plain old rectangular ones to the glamorous ones which draw attention to themselves. Such boxes force us to believe premium quality cigars are packed in these Custom Cigar Boxes. That is the power of customization! When purchasing a luxury class cigar, it is expected of the packaging to live up to the image of the brand. Cigar packs tell a tale of their own although they are equal parts storage unit and marketing tactic.  They are designed which a practicality, and utility which increases their lifespan. Cigar packs are known to last for years, even after their insides have been consumed entirely. Cigar packs of every style have been upcycled in several ways with a lot of manufacturers reusing them to build furniture, and even musical instruments! However, there are still several things about a cigar box which you are surely unaware of, besides the basics. Such aspect of a cigar box is what makes them shine.

Just like luxury cigars, their packaging is also crafted under watchful eyes. Here are some facts about cigar packaging that we are sure you did not know about:

H. Up Mann: the Creator of Cigars in Boxes

The Up Mann brothers are known for being the first ones to pack their cigars in boxes. However, the cigars that they sold in boxes were not of their own brand.

In the 1800’s the number of factories across the US was growing rapidly, especially because of the lack of government regulation regarding cigar manufacturing. Hence the government enforced strict laws surrounding the production of cigars, their sales and packaging.

During the civil war, soldiers manufactured their cigar containers to make fiddles to pass the time in camp before they set out to March or for battles. This is where the practice of making instruments from cigars gained fame.

Cuban cigar packs are designed with mysterious stampings and markings not only inside, but also outside the box. Each of these markings are known to have a hidden meaning behind them.

What You Should Know About Cigarette Boxes

Cigarette Boxes are mostly made out of paperboard. A pack of cigarettes is designed with several precautions to prevent the cigarettes from getting damaged. This includes paper or plastic, an additional layer of flavor protective foil, and airtight plastic film which prevents the cigarettes from losing their flavor. Cigarette packaging is further subcategorized into two types of packs, a hard pack, and a soft pack. While hard packs can be closed again once they have been opened, a soft pack cannot.

Most cigarette packs have warnings printed all across the front, depending on the country they have been manufactured in. standardized tobacco warnings have been made compulsory in the European Union.

Every government has its own set of rules when it comes to packaging cigarettes. The number of cigarettes you will find in one pack will vary from country to country. Australia allows only 25 cigarettes to be packed in one pack, however packs of 30, 40, or 50 are also allowed. On the other hand, the United States allows at least 20 cigarettes per pack while in the United Kingdom, this number is fixed.

Regardless of how many cigarettes are packed in one box, the dimensions of the pack do not change and matches boxes that contain 20 cigarettes. According to the latest updates, the brand name is printed in a basic interface. The entire surface area of the cigarette pack is covered with health warnings in the form of text, as well as pictures.

What Is a Hard Pack and a Soft Pack?

When you purchase cigarettes at your local store, they will most often be packed in hard packs which are a type of paperboard packaging introduced initially by Phillip Morris in 1955. Flip top cigarette cases prevent cigarettes from crumbling, even when they are kept in a pocket or in someone’s handbag.

The logo on a hard pack is mostly adorned on the top of the pack which ensures the consumer glances at it every time they open the pack to pull out another cigarette. This is an effective technique to build brand loyalty. With your brand’s logo imprinted into your consumer’s brain, they are likely to return to you if they liked your product!

On the other hand, a soft pack is made of thin paper. The soft pack contains 20 cigarettes and is not a convenient option because they are easily ruptured. In addition to this, they are not preferred because they cannot be resealed which means once you have opened a soft pack, your cigarettes are likely to dry out. On the bright side, a consumer can access a cigarette easily without having to open a pack every time and since it contains a smaller number of cigarettes it is relatively smaller in size.

Premium packaging holds exceptional value, especially when it comes to cigarettes and cigars. This is because, historic or ancient cigar containers or cigarette containers become more valuable with time. This is what makes them so popular among collectors. Most of the time, collectors base their collection on specific criteria for example the brand, time period, country of producer, or even the warning message. Full packs of cigarettes or cigars are valued more than an empty one. Plus, cigarette manufacturers often label some of their packs as ‘collectibles’ to attract collectors and make more sales. When it comes to cigarette or cigar packs, undoubtedly Custom Packaging tends to be of exceptional value. It increases the overall appeal of the cigarette and as time passes, the pack becomes more valuable. This is why cigar and cigarette containers are a popular collectible today. Their price increases which makes them more valuable, especially if they are a special edition from specific brands!